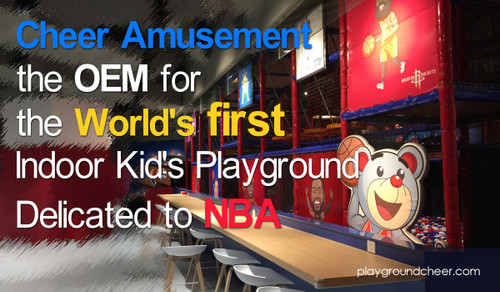 NBA Basketball themed indoor play center in Shanghai was build up and completed the installation June 2016 by Cheer Amusement. It occupies a floor space of approx. 240 sqm with a height of 4.35m, which is able to accommodate approx. 180 kids.

Variety of activities have been included in the mainframe including a giant ball pit with thousands of balls, large 2-lane slide ending in the ball pit, spiral slide with clear windows, spider tower, ballocity, parallel glider, mini tramp park and so on. At the toddler place of this FEC, the NBA Court, composed of track signs, play rules, mini basketball area, learn & play panels, and various obstacles on track and many mores for those who can find it out on their own when touching at the moment of visiting,is now one of the new hot spot in Shanghai . Be an one day NBA star there in Shanghai.

Cheer Amusement is highly honored to be the supplier creating such a breathtaking play land for NBA!

This product hasn't received any reviews yet. Be the first to review this product!